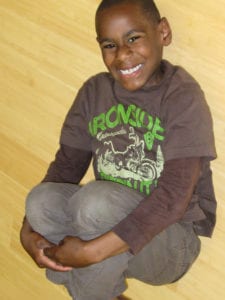 Jared Hassan is a 10 year old musician who plays global percussion instruments and the saxophone with Bay Area Youth Arts. He has an amazing “musical ear”, and his music teacher says he is the , “ . . . . reincarnation of Thelonious Monk and Charlie Bird.” He studies in the advanced music class with Bay Area Youth Arts and has performed at Yoshi’s and for Congresswoman Barbara Lee with their youth ensemble. Jared’s mother, N’sombi is featured with her son in the book, “Thicker Than Blood”, a picture book which tells the stories of adoptive families, written and curated by a University of California Berkeley photography major. I first met Jared, seven years ago at an MPACT class at the West Oakland library.

Jared was almost three years old at the time, and he looked like he was five. His mom tells me he is still big for his age. During the first several classes he hid under the tables and dashed out the door multiple times during the class. I could see that N’sombi was anxious that this dance class might not be a good fit for them. Following that first class experience we encouraged N’sombi to return with Jared, and assured her that with time he would acclimate to the class. The next several classes were similar, and then Jared became interested in the other kids. He was new to playing with other children, so his way of getting to know them was to crash into them, or jump on them while they were making a low shape. After attending several six-week class series over a couple of years, Jared gradually danced more with his mom, and navigated the dance room with other children, learning to dance near them without crashing. He used his words to say “hi” and “goodbye” to his teachers and dance friends.

“My child is adopted and so I needed to find something to bond. I used to dance and so when I saw this it was a thing I wanted to try … And so, I do it for the bonding, although this is the first that we’ve ever really bonded. Cause he’s not, he’s not, he hasn’t (starts to choke up) learned that yet. You know what I mean? So, he’s in the process of learning to bond. So, even though he runs around and does what he does, he’s learning to come back, which is something that he hadn’t done before. We’d never danced together before. It was always him over there and I was over here. But now, he’s learning to come dance as a family in this class … it’s a good place for us to learn how to bond, for him to learn how to bond. He was a wild child. I was gonna to take him out of class. I was afraid for the other children, because he was a runner, ran in circles, circles, circles. But he finally got a grip, he’s ready to behave, he’s having fun. He’s being part of the class instead of not in it.”

When Jared was five years old he started dancing at the Berkeley Luna studio through our tuition assistance program. He and his mom were comfortable at the Luna studio; they trusted the teachers, and Jared danced at our studio until he was seven years old. About once a year I call N’sombi to see how her son is doing. Jared will attend middle school this fall. She is considering a school that has a strong music program; and they might possibly consider Oakland School for the Arts. In our most recent conversation she said that if he does pursue a music-based school she can include “Luna” on his resume as his first experience with the performing arts.