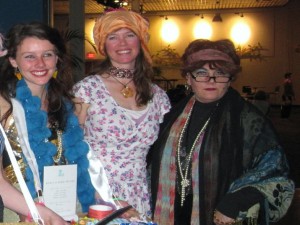 Jessica Bohn was the same age as her son Dashiell (12) when she first showed up with two friends, Bootsie & Reeves Battle, to take the adult modern-jazz class I taught on Tuesday nights at Somebodies! Dance studio on Telegraph Avenue. At the time (1982), I was delighted and challenged to consider how to integrate these brave and passionate young dancers into an intermediate dance class for grown-ups. All three teens stepped up with talent, determination and enthusiasm-Jessica brought a level of passion that belied her years.

After high school graduation, Jessica and friends went off to explore their own worlds. Occasionally, I would run into Jessica’s mom, Diana, in the neighborhood or on BART. We would reminisce about the old days-she told me that she still vividly remembers a soulful solo that Jess performed to Anita Baker in one of our student concerts.

Imagine my delight when Jessica reappeared decades later with two young sons in tow! Like their mom and grandmother, Dashiell and Dyami were curious, engaged people. It was fun to have them at Luna. Dance did not remain a priority for Dyami, but Dashiell stayed on, making dances about his expanding interests along the way. For the past nine years, Dashiell has enlivened his choreography with his knowledge and passion for geology (especially gems and rocks), science, martial arts, and improvisation.

Dashiell performed his choreography — a solo this past January at our family dance birthday party — launching the first of many celebrations of the Silver Jubilee. Like his mother before him, he performed with passion and his acute understanding of the craft of composition belied his years.

Although this year we celebrate 25 years as Luna Dance Institute, some of the deep relationships formed at Luna began much earlier. Others are new. Many are intergenerational!