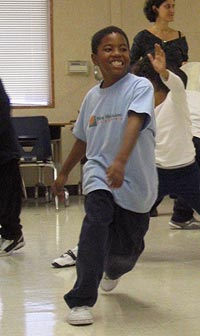 Outcome: In 2009-10, New Highland Academy, a public elementary school of the Oakland Unified School District (OUSD), became the first to provide every child K-5 with scope and sequence, standards-based dance learning throughout the entire school year. For the first time, students were regularly achieving grade-level benchmarks for proficiency in the dance discipline.

Process: New Highland’s success followed nine years of building a culture for dance at this school, located in one of the most under-served, low-income neighborhoods in East Oakland, California. After completing OUSD’s Dance Learning in the 21st Century: a Blueprint for dance learning K-12 in May 2009, Luna chose NHA to pilot the Blueprint’s elementary curriculum because of the school’s strong administrative leadership (led by principal Liz Ozol) with staff committed to arts learning as integral to the student experience. Students received a full year of weekly 50-minute stand-alone dance classes taught as models by Luna’s faculty with side-by-side professional development for the classroom teachers. They performed each week for peers, each semester for the school community and at least once each year in public through cross-district field trips and participation in Bay Area Celebrates National Dance Week.

Once the progression of dance learning was established at NHA, Oakland hired its first full-time elementary dance teacher to continue the program. For more than a decade, dance has been central to the cultural experiences of children at NHA.

Challenges: Although OUSD has a strong history of arts education, the district suffered several years under state conservatorship as a “low-performing” school. New Highland was re-organized as part of a district plan to create smaller, community-based schools. While research supports a correlation between small school size and student success, OUSD continues to be plagued with severe financial crises, diminishing community confidence and lack of infrastructure to commit to its many initiatives over time. Nonetheless, with the vision of OUSD’s arts manager, Phil Rydeen, an infrastructure for dance is being built in Oakland with increased opportunities to reveal its potential to support student success.

Impact: The teachers at New Highland Academy observe the following effects of dance on their students: 1) Dance allows them to see strengths in their students that are not revealed at any other time; 2) Dance enhances language development, particularly for English language learners; 3) Dance allows students the opportunities to gain confidence as they create and share their original works; 4) Dance requires a level of collaboration that is carried over into other areas of school life.

Midway progress: In 2012, the first 5th-grade class to have dance for their entire tenure at NHA graduated.  The ceremony included dance, of course, with performances of original pieces choreographed by both the students and their classroom teachers.  Other highlights of the year included NHA teacher leaders Emily Blossom, Kimi Ward, Joanna Davis, and Erika Englund teaching dance on their own with minimal coaching support from Luna faculty.  We are thrilled to announce that with the strong support of principal Liz Ozol, NHA dance leader Kelly Banks and committed and engaged faculty, NHA will have a designated dance studio for its 2012-13 dance season!