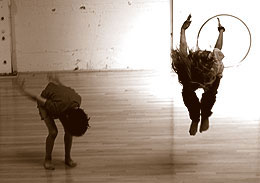 Outcome: Luna has been engaged in an action research on parent-child engagement through dance with researcher, Edward Warburton, PhD, University of California, Santa Cruz. After the first year of testing the research instrument for validity and developing inter-rater reliability, we had an unexpectedly strong outcome. Participating teachers reported that using the instrument had made them better teachers. Specifically, the tool allowed them to make better ‘in-the-moment’ curriculum decisions to facilitate parent-child interaction. This has tremendous implications for professional development and while we continue on to the data collection for this project, we will be presenting the project’s effect on teacher performance at the National Dance Education Organization’s conference in October 2010.

Process: During 2008-09, we developed a framework, based on the literature on empathy from neuroscience and attachment fields of study, from which to observe and record parent-child engagement. Our study examines three levels of engagement: the most basic (activity) measured by general excitement and attention; an intermediate level (interest) measured by a specific focus and connection to another; and an advanced level (mimicry) wherein people consciously or unconsciously mimic another’s gestures in conversation, creating the sense of being “on the same page.” Research has shown a high correlation between mimicry and feelings of trust and empathy. We created tools and a process for observing and recording engagement behaviors during the MPACT classes taught at 2 residential locations and at community libraries. During 2009-10, we tested and refined the tools as we assessed inter-rater reliability. Data collection will take place during the 2010-11 year, with analysis and final reports completed by the end of December 2011.

Challenges: Because MPACT classes are often taught in tight spaces and attended by multiple families, observing for the three levels of engagement on an on-going basis requires focused and deliberate attention. Given the various responsibilities of teaching, observing for specific criteria can easily be superseded by curriculum delivery and logistical details such as registering new families. MPACT was designed to be co-taught with ample time built into teacher fte for reflection. This allowed for a high degree of inter-rater reliability and made the observation and recording process possible. It would be difficult to collect this data as a solo teacher; the process and tool would need to be adjusted.

Impact: The first phase of this action research project improved the teaching of an already strong MPACT faculty. It revealed the importance of observation to teaching practice and confirmed our commitment to putting observation skills at the core of all of our professional education courses. Sharing these preliminary findings with national teaching artist professionals will encourage others to build into their teaching practice structures for observation and reflection.

UPDATE: After completing the data collection phase of this work in October, 2011, Ted Warburton, Nancy Ng and Patricia Reedy presented early findings at the annual National Dance Education Organization conference in Minnesota.  Audience participants came from diverse backgrounds and professional situations and all were intrigued by this work.  We’ve been invited to convene a panel of the various professionals who we’ve helped to create similar programs at the 2012 conference.  Additionally, Dr. Warburton is in the process of writing the paper for submission to international research journals.

UPDATE 10/18/12: Read case study Parent-child Engagement Through Dance for the evolution of this story.