March is Arts Education Month and from now until the end of March our friends at Create CA are sharing small weekly actions we can all take to support the movement for arts education. Here’s this week’s action:

Look up your data and see where your district or school stands!

The California Arts Education Data Project has been updated with new branding, tools, and data!

The new data shows that California went from a 39% average participation rate to 40%. That means more students are taking at least one arts class. Which is great! But progress is still way too slow.

It is our belief that in order to expand access to arts education in our schools and communities we absolutely have to know where we stand. So please check out the Interactive Dashboard and learn about the growth and gaps in arts education equity across the state!

The National Arts Action Summit is a multi-day event, March 30-31, 2020 in Washington, D.C., giving you the opportunity to receive crucial advocacy training from experts in the field and then put that training into practice on Arts Advocacy Day on Capitol Hill. Hosted by Americans for the Arts in partnership with over 85 national arts organizations, Arts Advocacy Day is the largest gathering of its kind, bringing together a broad cross section of America’s cultural and civic organizations. Grassroots advocates from across the country come to Washington, DC to meet with their Members of Congress to garner support for issues like arts education policy, the charitable tax deduction, and funding for the National Endowment for the Arts.

Why should I attend the National Arts Action Summit?

Luna is thrilled to welcome the following artists, educators and activists to share their voices and perspectives in our Dance Equity & Inclusion Day March 21.

Suzanna is a graduate student in the Joint Doctoral Program in Special Education at UC, Berkeley and San Francisco State University. She holds master’s and bachelor’s degrees from the University of Chicago and is a member of the Phi Beta Kappa Society. Suzanna has studied autistic intelligence, autism and creativity, and her research currently focuses on the fascinations and special interests of autistic individuals. Current written works in preparation for publication include “Autistic Intelligence: A Review of the Autistic Cognitive Style and its Relation to Intellectual Giftedness” and book chapter, tentatively titled “Personal Perspectives”, coming out in the next edition of Learners on the Autism Spectrum (tbd). Suzanna has presented at the 2016 AASCEND conference, SPEDDR, and autism-focused courses and research groups at UCB and SFSU, and her artwork Knitting Playscape was displayed at the Autism Art Resource Center (AARC), 2017.  She is also a member and adviser to the Autism Collective for Peer Socialization, Play and Imagination and the Autism Art Resource Center. An active participant in autistic culture herself, Suzanna is passionate about educating others about the neurodiversity paradigm.

Eddie is the Artistic Director of Sewam Dance, and a member of the Pascua Yaqui tribe of Southern Arizona and Northern Sonora Mexico. He is an active member of the Native American community and a representative of his culture through various aspects: as a dancer, singer, teacher, playwright and filmmaker. For over twenty-five years, his involvement and commitment to Native heritage has provided him with the opportunity to share a wealth of information amongst diverse communities. His work has included the presentation of assemblies and residencies in Bay Area schools working with students and encouraging the development of appreciation and respect for American Indian dance, music, culture, history, art and sign language.
Eddie is currently a professor for American Indian Studies at San Francisco State University and is a monthly host for KPFA Radio’s Bay Native Circle program.  He has presented as a guest lecturer across the country in American Indian music, dance, religion and contemporary culture.

Alleluia is an American Pilipino director, choreographer, and non-profit arts leader. She has created over twenty full-length dance theater works that have been presented on stages in the United States, Europe, and Asia.  She has received numerous awards, including the inaugural Artistic Legacy Grant from the San Francisco Arts Commission in 2017 and the Wallace Alexander Gerbode Commission for Choreographers for her 2019-2021 dance and film project,   ‘In the Belly of the Eagle’.

She is the Artistic and Executive Director of Kularts, the nation’s premiere presenter of contemporary and tribal Pilipino arts. Her dance film, ‘She, Who Can See’ was a officially selected  and screened at the  2018 CAAMFest  formerly known as the SF Asian American  International Film Festival. She served as member of National Performance Network’s Artists Committee, and as a board member of Asian Pacific Islander Cultural Center, Brava! For Women in the Arts, Yerba Buena Gardens Festival, and Dance Bay Area, and an active member of San Francisco’s SOMA Pilipinas, Filipino Cultural Heritage District.

Her advocacy and equity work led to the first-ever National Convening on the Future of Physically Integrated Dance in the USA, followed by six regional town halls throughout the country in 2016. This project, supported by the prestigious Doris Duke Charitable Foundation National Project Program, culminated in an extensive report and the launch of the AXIS Artistic Advancement Platform to Advance Artistry, Opportunity and Equity for Dancers with Disabilities. She has been instrumental in the creation of the Dance/USA Disability and Dance Affinity Group and co-chairs the group. Judith is currently working as an independent consultant in dance and disability.

Claudia Alick is performer, producer, and inclusion expert. Named by American Theater Magazine as one of 25 theater artists who will shape American Theater in the next 25 years, Alick has served as the founding Artistic Director of Smokin’ Word Productions, is a NY Neofuturist alum, published playwright, recipient of NYC Fresh Fruit directing award, TedXFargo speaker, the Lilla Jewel Award for Women Artists, featured on HBO’s Def Poetry Jam and former Community Producer at the Oregon Shakespeare Festival. At OSF for ten years she produced events such as “The Every 28 Hours Plays”, “The Green Show”, The Daedalus Project, OSF Open Mics as well as producing/directing audio-plays with OSF such as the Grammy nominated “Hamlet”. Her personal projects include her podcast “Hold On…Wait for it”, vlog “This Week in Cultural Appropriation”, StreetPoetry, and one-person Show “Fill in the Blank” exploring disability and the medical industry. Claudia served on Oregon Arts Leaders in Inclusion, the steering committee of The Ghostlight Project, the steering committee for Black Theater Commons, and is currently managing content with The Crew Revolution black female leadership and co-president of the board of Network of Ensemble Theater.  In 2019 Claudia Alick serves as founding executive producer of the transmedia social justice company CALLING UP whose projects include The Justice Quilt, Decolonizing Boards, Co-artistic direction of The FURYFactory Festival and consulting with foundations and companies around the country.

Eric Kupers has co-directed, choreographed, and performed with Dandelion since its inception, creating numerous works that have been presented throughout California, nationally, and internationally. He is deeply influenced by his work as a performer in the companies of Della Davidson and Margaret Jenkins, as well as by important teachers Charles Edmondson, Bella Lewitzky and her company, Mel Wong, Silvia Martins, Ellie Klopp and Joe Goode. Eric is an Associate Professor of Dance at Cal State University East Bay and is heading up the development of an Inclusive Interdisciplinary Performance program at the university. Eric is the director of Bandelion, an ensemble of dance, music, theater and visual artists committed to ongoing interdisciplinary research, as well as the CSUEB Inclusive Interdisciplinary Ensemble, which brings together students, alumni, community members and professional performers with and without disabilities and from diverse cultures to create original performance works. Eric aspires to create performance that resembles a collision of the work of Sweet Honey in the Rock, Pina Bausch, Contraband, and Dr. Seuss. Eric has created commissioned works for AXIS Dance Company (supported by a Princess Grace Award for Choreography), Big Moves, Cal State University East Bay, California Choreographers Festival, Dancing in the Streets/NYC, and choreography for projects by John Killacky, California Shakespeare Festival, and Highland Summer Theatre. He has been a resident artist at the Baryshnikov Arts Center, CELLspace, Jon Sims Center for the Arts, and ODC Theater.

Our friends at the Arts Education Alliance of the Bay Area are hosting a FREE community roundtable conversation about AB5. Check it out!

Childcare will be available.

Refreshments will be provided.

For this session we will discuss the impact of California’s AB5 labor law on arts education organizations and teaching artists – and what our community is going to do about it.

Reports from Jean Johnstone, Executive Director of Teaching Artists Guild, about interesting developments on the national and state level for arts education workers.

A panel discussion with

How can AEABA support our members and stakeholders about these employment issues?

Take the arts education pledge! By signing the pledge you are stating that you believe in and stand for the principles outlined in The Declaration of Student Rights.

CreateCA is hoping to collect 1,000 signed pledges by the end of Arts Education awareness month in March. So please share this widely!  CreateCA.org/pledge

An update from the CA Department of Education:

Comments may be submitted in any format. However, it is highly recommended that comments include the chapter, page, and line number(s) of the text as it is currently written in the draft, and the exact language of the suggested change. The deadline to submit public comment for the second public review is March 30, 2020.

Curious about the timeline for reviewing and adopting these documents? See here.

Are you a teaching artist, studio owner, company director, or arts leader affected by AB 5? Tell your story! Legislators need to better understand the impacts of this far-reaching bill on our field.

A follow-up bill AB 1850 is being drafted now to address the ambiguities and unintended consequences of AB 5. Sacramento needs to hear from the dance sector to consider our perspectives!

What you can do: Email or write your state Assembly Member and Senator to share your story about how AB 5 is affecting you.

See here or here to find and contact your state representative and assembly member.

The CDE, the CCSESA, and TCAP are presenting a six-part webinar series on the newly-adopted California Arts Standards, with webinars on each of the arts subject areas. These webinars will feature county office of education Arts Leads and TCAP Teacher Leaders, addressing what’s new and challenging in the disciplines and providing examples of the new standards in action.

Register here for the Dance Standards Webinar on March 5, 3-4pm.

Join us for monthly family dance jams in our large and comfortable dance studio! Adults and children connect and get their wiggles out in these lively dance classes. Families big or small can drop in for $25. 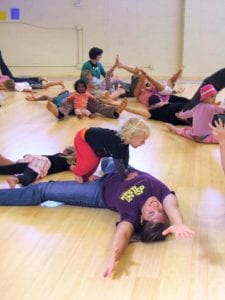